So there is something you may not know about me.  I’m crafty.  And I don’t just mean that I’m clever and sneaky (which I am); I like to make crafty things.  Mostly I make clothing for the girls, but I recently got a sewing machine and I’ve been branching out to other things as well.  This is why I’ve been seriously slacking on my blog.  So as an apology for neglecting all of you, here are some pictures of the things I’ve been making along with the links to the tutorials I used. 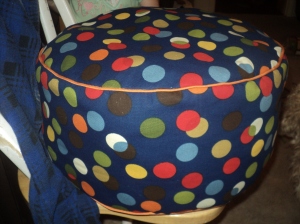 Floor cushions for kids to sit on!

I made a couple of floor cushions for my niece and nephew for Christmas.  And for the record, I made these before I had the sewing machine.  That’s right…I sewed these bad boys by hand.  Which is insane.  But I like doing it.  Especially while I watch Dr. Who.  Want to try your hand at these?  Check out the tutorial over on Living With Punks.   http://www.livingwithpunks.com/2010/05/tutorial-land-of-nod-inspired-floor.html 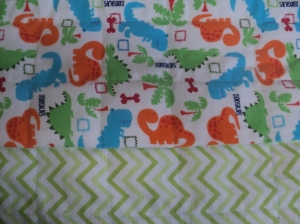 This blanket is dino-mite!

I’ve also started making weighted blankets.  What is a weighted blanket, you ask?  It is a blanket that has a grid of pockets filled with little plastic bead things (Poly pellets).  Some kids have a hard time settling down to sleep, and the extra weight can help sooth them.  Like a big hug you can sleep in.  These were made for a couple of my friends after one of them was talking about the cost of weighted blankets online.  There is a joke that if you want to charge more for something, slap the words “baby” or “wedding” on it.  Unfortunately, that hold true for anything made for special needs kids, too.  Companies that make things for special needs people know that there is little competition, so they can charge a lot more for their product than what it is really worth, and people will pay for it because they have to.  It is a terrible truth that special needs families are wrung dry on a regular basis, paying for the specialized items they need.  So I made these for a reasonable amount of money, not the 200-400% mark-ups I found when I searched for them online.  I used the tutorial at Compound LIving.  http://www.compoundliving.com/2013/01/diy-weighted-blanket.html 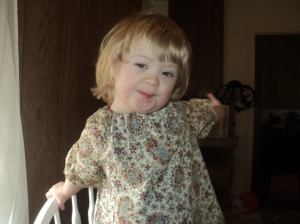 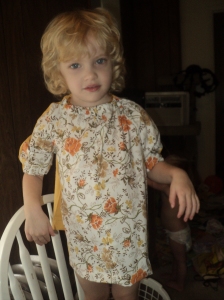 Not nearly as thrilled with her shirt.

Thanksgiving tunics for the girls.  They are going to be gobbling turkey in style thanks to some very pretty fabric scraps and this tutorial from Once Upon a Sewing Machine.  http://onceuponasewingmachine.com/diy-toddler-peasant-dress/ 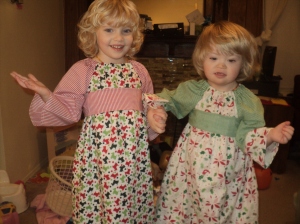 And of course, what follows Thanksgiving?  Christmas of course!  Here are the girls in the dresses I made them.  The first two are based partially on the peasant dress pattern, but I changed the bottoms so they were more fitted.  I don’t have tutorials for the rest of the dresses because I just made them up.  I saw pictures of dresses I liked and just did my own thing.  That’s the cool thing about sewing.  You can just MAKE stuff!  Right out of you head!  Like magic.  Sewing magic.

These dresses were made for a gift exchange.  I wanted something she could play in, but that looked like her favorite princesses.  Laurel very much enjoyed modeling these.  Again, no tutorials because I just made them up.  Maybe I should make tutorials.  In my spare time.  ha ha ha 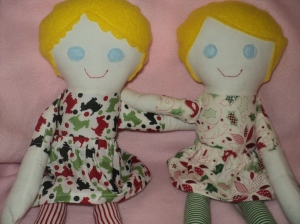 Laurel and Ellie have been turned into dolls!

Ok, I have to admit that I am ridiculously proud of these dolls.  I never thought I’d be able to make something like this.  But thanks to the super easy tutorial at Make It & Love It, I have made three so far and am planning on two more (a Princess Peach from Mario Bros. for my niece and a Batman for my nephew).  I love love love these.  http://www.makeit-loveit.com/2013/02/girl-boy-fabric-dolls-pattern-pieces-included.html

What does the fox say?

A fox scarf.  Because it’s freaking awesome.  I want to make a million more of these.  Different animals, different colors.  And I will.  Oh yes, I will….. after Christmas.  The tutorial calls for minky fabric for the bottom of the scarf, but I didn’t use that.  I just used more flannel.  Why?  Because minky is the devil.  Ask anyone who sews.  The. Devil.  Should you wish to make a little friend to wrap around your neck, check out the tutorial at Prudent Baby.  http://prudentbaby.com/2012/12/baby-kid/diy-fox-scarf-with-free-pattern/ 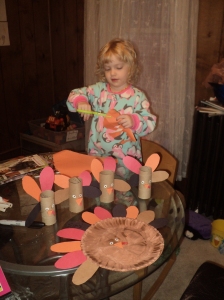 Cutting takes a LOT of concentration 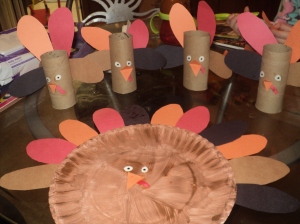 This caption is so corny

And, of course, I’ve been crafting with the kidos.  Mostly with Laurel, since Ellie does crafts at preschool in the morning, but Ellie got in on the action with the bead corn.  Laurel really liked making the turkeys, even if she does think they are chickens.  We also made native American head dresses out of construction paper feathers, but they were destroyed during our impromptu drum circle/pow wow.  Our pilgrim hats were an epic fail, cut we all enjoyed getting glue everywhere.  Ok, they enjoyed it.  I enjoyed sticking paper to their arms and listening to them shriek with glee.

What kind of crafts do you like to do?  Do you craft with the kids?  Do you have a favorite pattern or tutorial you’d like to share with the class?  Leave a comment and let me know what you’ve been up to!

Sister love in the flesh and in the fluff

What Have I Missed??

What People Are Saying