The day that millions of people go into battle mode so they can bag the best deals on everything from big screen TVs to fondu pots to whatever the crazy super popular toy is this year that their kids will break ten minutes after getting.  People have strategies, back up plans, coupons.  They have memorized the sales fliers and recruited their friends and families to join them in their crusade for cheap stuff.  It is consumerism in all its insane glory. 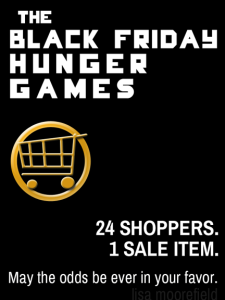 Katniss has nothing on your great aunt Betty

The only time I have ever gone shopping on Black Friday was three years ago and it was completely by accident.  The girls were about four months old, and Ellie had had heart surgery a few weeks before, to fix a heart defect that she was born with.  Then she caught pneumonia.  So she was in the cardiac intensive care unit of the Philadelphia Children’s Hospital for five weeks.  We spent the girls’ first Thanksgiving at the Ronald McDonald House.  A (very rich) family down there pays to have a caterer come in for the major holidays.  It was really nice….except that Ellie was still in the hospital.  Laurel tasted her first solid food in the form of a lick of mashed potatoes, which she did not like.  After dinner, we went back to the hospital to sit by Ellie’s bedside, like we had been for three weeks straight at that point.  Not the most festive first Thanksgiving, but we were just happy to all be together.

Laurel’s idea of how to eat turkey 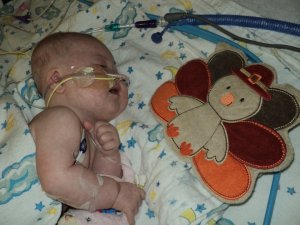 Ellie couldn’t wear her bib, but she liked the colors

If you’ve ever spent a long time with someone in the hospital, you will know that time stops having any meaning.  Every day is like the one before.  So, the day after Thanksgiving was just that; another day in the endless march of days until we could take our little girl home.  It was also the day I ripped the only pair of jeans that fit my post-partum body.  So I decided to drive back home to Allentown and pick some stuff up, pet the dog (who has still never forgiven us for abandoning her for over a month), buy a couple new pairs of jeans from Lane Bryant, and hit Target up for some more diapers.

Everything was going really well; there was practically no traffic on the turnpike, Piper was SO happy to see me, even the cats were excited enough to glare at me reproachfully from the cat tree.  Then I drove to Target.  My first thought was, “Wow.  They must be having a sale or something,” when I saw the packed parking lot.  Then it hit me…..yesterday was Thanksgiving….which makes today…..BLACK FRIDAY!  Oh My God.  I need to shop on Black Friday.  Shit.

I won’t lie.  It was terrible.  I was tripping over people left and right in the baby section, just trying to grab a box of diapers.  Then I had to wait in line forever; the only person with one item among throngs of people with one, two, or even three shopping carts full of stuff.  A nice lady took pity on me and let me go ahead of her.  I almost cried in gratitude.

Then I drove to the mall, because remember I needed to buy jeans.  I didn’t have a choice.  I literally had no pants that fit me.  Dear Lord.  Never again.  If I ever find myself in a similar situation I will just wear pajama pants.  I don’t care how fat and/or sloppy I look.  I will never go shopping on Black Friday again.  Ever.

So what do we do the day after Thanksgiving?  (Other than sleep off our turkey comas.)

We decorate for Christmas, of course!  Down come the paper turkeys and painted pumpkins, down come the pilgrim hats and native American head dresses, down come the Halloween decorations we thought we put away but apparently we didn’t.  And from the attic, down comes the Christmas tree, the ornaments, the stockings, the three thousand creepy-ass nutcrackers that Chev collects, and the nativity.  On goes the Christmas music, and the decorating party commences. 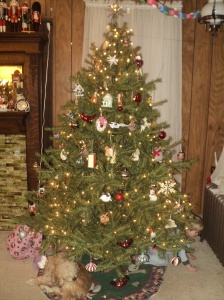 Please ignore the fact that my dog is biting her ass.

The past few years our tree was kind of lame, but the girls are older now, so we have brought out some of our nicer ornaments.  All in all decorating went really well.  Laurel was sticking things on the tree like a pro.  Ellie, as predicted, couldn’t figure out how to do it and got really frustrated and pissed off and soothed herself by kicking the plastic Christmas balls around.  But that was bound to happen anyway.  At least there were no tantrums or injuries involved.

So that’s what we do on the day after Thanksgiving….we gather around as a family and ring in the holiday season with songs, lights, and the occasional impromptu dance break.  While other people are fighting over the last video game system, we fight over who gets to hang the last ornament on the tree.  While stores are making money, we are making memories.

And I love it.

What Have I Missed??

What People Are Saying